Mayor Christos Pagonis raised some lingering issues for the City of Chalkida, such as the lack of a General urban and City Plan for a large part of the district “Haravgi” and also the matter of waste management, to the Deputy Environment Minister Giannis  Tsironis, at a meeting that took place on Tuesday June 14 in Central Greece, Lamia.

Specifically, the Mayor said that the G.U.P of Chalkida was submitted in 1997 and after 17 years, in 2014, was returned without having the process completed. Thus, the largest Municipality of Central Greece has no General Urban Plan, and therefore there is no possibility for land use, with all that this entails.

Furthermore, Christos Pagonis mentioned the problem that exists in the district of “Haravgi”, where the City Plan was approved at 60% while for the remaining part the residents are required to pay retention fines.

Lastly, he pointed out the major problem that exists in the municipalities of Central Greece with waste management, asking the deputy Environment Minister to provide a legislative initiative to unblock the issue in order το avoid losing million in projects that are either n progress or have been initiated. 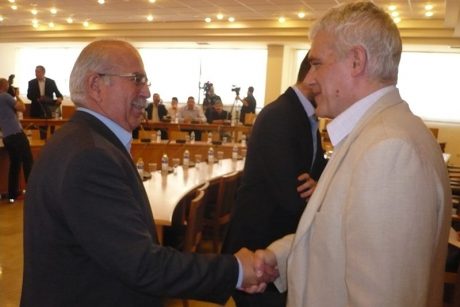