On the day of the show at the theater entrance, two hours before the show. Price: 15 € general admission. 12 €, students, unemployed, children etc.

The Seven on Thebes of Aeschylus is an extremely intense political tragedy, which is rarely performed.  This summer this ancient tragedy is produced by the National Theatre of Northern Greece (NTNG), and will be presented in Chalkida, in” Orestes Makris’ theater at 21:00. This is a new edition of the original tragedy with a modern translation by the poet Giorgos Blanas. It is directed by the internationally renowned Lithuanian director Tsezaris Gkraouzinis.
The performers are Giannis Stankoglou  – in double distribution with the leading actor of NTNG Christos Stylianou – the role of Eteocles. With them appears on stage Nadia Kontogeorgi (Antigone),  Iovi Fragkatou (Ismene), Yorgos Kafkas (Angel), Alexandros Tsakiris (Herald) and a dance group of 14 young actors. 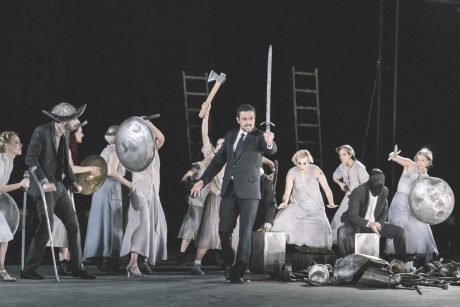