The European Shotokan Karate Championship of 2016 begins today Friday, November 25th, at 14:00 at Kanithos Sports Hall in Chalkida. The tournament will be completed on Sunday afternoon, November 27th.
Given the chance that the City of Chalkida will host this event, the Mayor of Chalkida Mr. Christos Pagonis invited to dinner the heads of missions and the Federation’s representatives on Thursday evening, November 24th. Moreover, souvenirs of the Municipality were offered to the honorary president of the Greek Federation of Karate Mr. G. Gerolimpos, the representative of the European Federation of referees etc.
At the dinner the Mayor of Chalkida Mr. Christos Pagonis welcomed the respresntatives of the foreign athletic associations in Chalkida, and wished them a good time in Chalkida. The Mayor stressed that the personnel of both the Municipal Authority and the Municipal Orgnanization for Athletics, Culture and Environment (MOACE) will be on their side during the tournament, offering their help for a succesful competition. It is noted that the opening ceremony is scheduled for 14:30 on Saturday, November 26th. 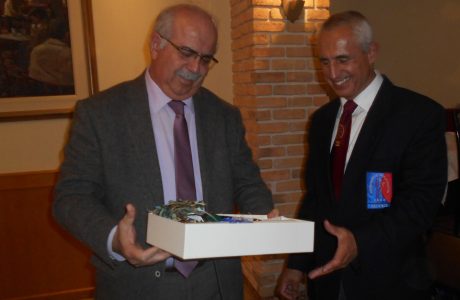