Event to boost tourism in Evia

The strengthening of the tourist flow in Evia and the promotion of cruises visiting Evia harbors was the main subject of the event, held on Thursday, April 20th aboard the cruise ship “OCEAN MAJESTY” which was docked at the port of Chalkida for this exact purpose.

The event, crowned with great success, was hosted by the Municipality of Chalkida, the company “MAJESTIC INTERNATIONAL CRUISES” and the Association of Shipowners and Cruise Ship Operators, and was attended by a large crowd coming from all over Evia and the wider region.

Present at the event was the Minister of Maritime and Insular Policy, Mr. Kouroumplis, the Deputy Minister of Infrastructure Mr. Mavraganis, the MPs Mr. Akriotis, Mr. Pratsolis and Mr. Kedikoglou, the President of the Supreme Court and former Prime Minister Mrs. Vassiliki Thanou, the Regional Governor Mr. Bakoyannis, the Vice – Regional Governor of Evia Mr. Spanos, the Vice – Regional Governor of Tourism, Culture and Sports Mr. Kontzias, the Chief of the Coast Guard Mr. Raptis, the mayors of Dirfyon – Messapion Mr. Psathas and Istiaia – Edipsou Mrs. Spanou, the economic supervisor of the Evia Chamber of Commerce Mr. Koukousas, the former MPs Mr. Papageorgopoulos and Kalamakides, the chairman of the Association “The Smile of the Child” Mr. Giannopoulos, the chairman of the Evia Labor Center Mr. Basinas, deputy mayors and municipal councilors.

The event was inaugurated with the commemoration of the crucible performed by the Metropolitan of Chios, Psara and Oinousses, Ch. Marcos (Chios is the shipowner’s birthplace) and was attended by representatives of the Local Church.

This was followed by a brief greeting speech by the General Manager of “MAJESTIC INTERNATIONAL CRUISES” Michalis Lambros. He stressed among other things that his company swiftly responded to the proposal of the Mayor of Chalkida for the organization of the event, with the main objective being the further development of the tourist flow in Evia. He also pointed out that Evia offers to its visitors rare touristic opportunities, especially the city of Chalkida, which has the privilege of being at a ‘walking” distance from Athens and can certainly offer its visitors an alternative form of tourism, a potential which unfortunately has to date remained untapped.

Mr. Lambros was succeeded as speaker by the mayor of Chalkida, Christos Pagonis, who explained that Evia and Chalkida, having experienced the consequences of deindustrialization in recent decades, have already turned their attention to tourism and that the Municipality of Chalkida has as one of its main priorities the development of an extrovert economy, through culture, sports and tourism, the promotion of certain actions and the development of attractions with the aim to extend the tourist season.

Maritime tourism has been and continues to be one of the most dynamic forms of tourism, contributing to the economies of the countries involved. Especially the cruise tourism responds to the needs of mass tourism and is an integrated tourist product that combines transportation, accommodation, catering, recreation and multiple activities. Although our country is an extremely attractive cruise destination, with a remarkable increase in cruise numbers during the last decade, it has not managed to benefit proportionally from the produced revenues. We lack in marketing and promotion, in targeted and continuous actions, and also in terms of infrastructure both in a regional and local level. And this is something that needs to be changed, taking into account the economic benefits for both the country and the local communities especially regarding the much needed aspect of job creation.

Chalkida offers unique geomorphological attributes and ideal environmental conditions, as well as a decent hotel infrastructure. If we want to be serious in promoting cruise and maritime tourism, we’ll need to attract significant investment capitals in tourist projects. The main investments are mainly related to port facilities in order to improve the docking and refueling of both cargo ships and yachts.

Being aware of the dynamics that can be unfolded in our country through maritime and cruise tourism, we look forward to the cooperation of shipping operators, the Association of Cruise Ship Operators and the regional authorities in order to strengthen tourism development and to promote the wider region. We also need the Professionals in the tourism industry to play their own part by exploiting new technologies, enhancing tourist infrastructure, thus rendering Chalkida a champion city of Central Greece in the tourist market.

Finally, I would like to thank in particular the General Manager of “MAJESTIC INTERNATIONAL CRUISES” Michalis Lambros, the President of the Association of Cruise Ship Operators and Maritime Managers Mr. Theodoros Kontes, OLNE and his executives, the former president of OLNE Mr. Tsergas and the Maritime Office of Mr. Nikos Boukos, the Harbor Master of Chalkis and the officers of the Coast Guard, without the precious and charitable offer of whom, this event could not have taken place, an event so important for the City of Chalkida.

The Minister of Maritime and Insular Policy Mr. Panayiotis Kourouplis and the representative of New Democracy MP Mr. Simos Kedikoglou addressed a short greeting speech while Mr. Theodoros Kontes addressed issues related to cruise tourism, explaining that Evia can take part in this dynamic section of tourism, by exploiting its harbors.

At the closing of the event groups from the Lyceum Club of Greek Women of Chalkida and the “Alonaki” Association performed traditional dances. A buffet was also offered to the guests, during which the mayor of Chalkida Mr. Christos Pagonis gave souvenirs to the ship owner and the ship master.

Finally, all guests were handed an envelope with a special postage stamp and stamp for the commemoration of the arrival of a cruise ship in Chalkida for the first time. 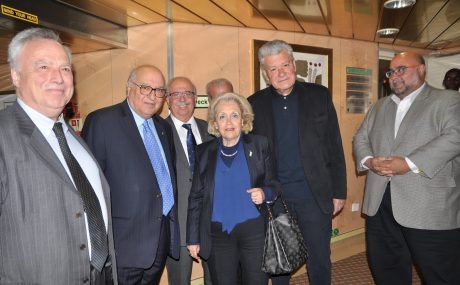