Twinning agreement between the Cities of Chalkida and Wuhan

An official visit was held on May 5, 2017, by the Mayor of the City of Wuhan Mr. Wan Yong to the City of Chalkida within the framework of the twinning program between the two Cities. Mr. Yong was accompanied by a numerous delegation. During the welcome ceremony which took place at the Chalkida’s City Hall, a twinning agreement between Chalkis and Wuhan was signed, thus proving the substantial progress that has been made in the level of cooperation between the two Cities during the last year and a half.

Mr. Yong praised Chalkida for its rich history and its potential and accented the existing positive prospects of cooperation between Chalkida and Wuhan in the areas of commerce, tourism and culture. “It is the third time that a Wuhan delegation visits Chalkida since the twinning program begun in 2015 and today’s signing of the twinning agreement is a tangible output of the excellent relations that have been developed between the two Cities and emphasizes the significant prospects for further development for the common good of the people” Mr Yong stated.

The Director of the Wuhan Bureau of Commerce, Mrs. Chen Ping made a presentation on the logistics and trade center which is planned to begin soon operation in Wuhan and will facilitate the import and distribution of agri-food products from the wider area of ​​the City of Chalkida, significantly benefiting local Greek businesses by granting them access to the vast Chinese market. She also announced the plan on behalf of the Chinese City to establish a direct flight from Wuhan to Athens in order to create a tourist flow from Wuhan to Chalkida.

The Mayor of Chalkida Mr. Christos Pagonis referred to the significant opportunity for economic and cultural development that is created through the cooperation of Chalkida and Wuhan. He underlined that Chalkida’s extrovert policy serves the City’s strategic goal for economic growth and noted that the presence of Mayor Yong in Chalkida is the best proof of the very constructive relations the two Cities now share. “The operation of the trade center in Wuhan City is the best gateway to the Chinese market for our high quality local products. In this unprecedented crisis that our country is experiencing, the City of Chalkida demonstrates through this cooperation the impact that local authorities can have in stimulating the local economy” the Mayor of Chalkida concluded.

In his welcome speech the Vice Governor of Evia Mr. Fanis Spanos stressed the importance of the initiative the City of Chalkida took to develop this twinning relationship and its positive outcome both for the City of Chalkida and for the region of Evia as a whole, stating that the Regional Government of Central Greece would offer its amply support.

Following the closing ceremony at Chalkida’s City Hall, an impressive acrobatics show with Wuhan’s world class team took place at Kanithos “Tasos Kampouris” Sports Hall. Thousands attended the show, mostly students. The Wuhan Acrobatic Troupe has received more than 80 international awards and distinctions in international competitions. There was also a performance of traditional dances by the Lyceum Club of Greek Women of Chalkida.

The City of Wuhan has a population of 10 million and is among the 5 most rapidly growing Chinese cities with a nominal GDP similar to that of Greece. 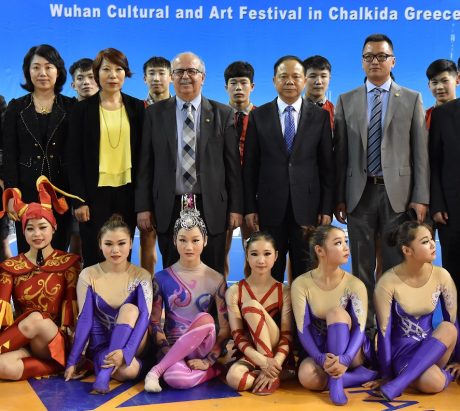