A numerous delegation of the Municipality of Reggio (Reggio Calabria) in southern Italy visited on Sunday, December 11th the City of Chalkida. The delegation was welcomed by the Mayor Mr. Christos Pagonis and the Secretary General of the Municipality Mr. Tilemachos Moraitis at the new Museum of Arethousa. The delegation was toured around the Museum, the Church of Agia Paraskevi and the Vailos House from Mrs. Pari Kalamara, Director at Evia’s Ephorate of Antiquities .
Following this tour the Italian delegation took part in a workshop at the Town Hall in which the historical ties and the prospects of cooperation between the two cities were discussed. Present on this workshop was also the President of the Evia Hotel Association Mr. Miltos Helmis (a video of both the City of Chalkida and the broader region of Evia was shown in the workshop).
The Mayor of Chalkida referred to the long historical relationship between the City of Chalkida and the City of Reggio, as the latter was founded as a colony of Chalcida in the 8th century BC and in the 1960s the cities were twinned. As a matter of fact, the delegation of Reggio was shown the Key to the City of Reggio which was awarded to the City of Chalkida and the relative commemorative plaque, both kept at a special showcase in the City Council Chamber.
The head of the italian delegation Mr. Cappellano expressed his appreciation and emotion for the warm welcome by and the hospitality of the City of Chalkida and handed to Mr. Pagonis a letter from the Mayor of Reggio Calabria Mr. Falcomata, in which the Italian Mayor expresses his strong desire for relaunching bilateral relations and for initiating cooperation in the fields of culture, tourism and trade. Through the letter an invitation was extended to a delegation of the City of Chalkida to visit Reggio sometime next summer.
In his closing notes the Mayor of Chalkida referred to the value of city diplomacy, the potential for development through the twinning process and stressed that the economic crisis in Greece offers an opportunity to redefine the development strategy of the City of Chalkida, through culture, tourism and extroversion. 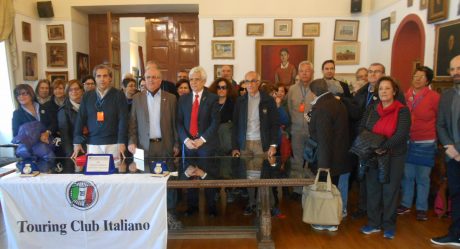