The City of Chalkida is preparing to host another major international sporting event, thanks to the efforts of the Municipal Authority. This comes to serve the Authority’s broader goal to further develop the sports tourism sector, which is one of the fastest growing sectors of tourism worldwide.

This time, with the contribution of the Municipality of Chalkida and the Municipal Organization of Athletics,Culture and Environment (MOACE)  Chalkifa will host during the last week of November, the European Karate Championship for Men and Women, which means that more than 1,000 people, athletes, coaches, escorts etc. will visit the city.

As part of this important event, a delegation from the Greek Karate Federation visited the Mayor of Chalkida Mr. Christos Pagonis on Thursday August 4th. The delegation consisited of the honorary President George Yerolimpos, Secretary General Emanuela Pontida and Sport Director Caves Gazi.

Present in the meeting was the president of MOACE Lilian Zlakoni with her associates. A discussion was held regarding issues of the forthcoming competition, as well as of the World Karate Championship, an event which is also scheduled to take place in Chalkida, in April or May next year. 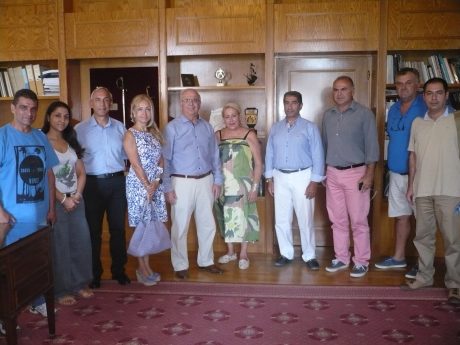