The Head of the Taiwanese Delegation visited the City of Chalkida

The Head of the Taiwanese Delegation in Greece, Mr. Sherman Kuo, visited on Friday, March 24 the Municipality of Chalkida and met with the Mayor Christos Pagonis.

The Mayor had the opportunity to explain the Municipality’s strategy regarding regional tourism development and presented the ongoing actions which aim to promote Chalkida to foreign visitors. Additionally the Mayor referred to the positive perspectives for developing bilateral commercial relations, particularly in the agrifood sector.

The Head of the delegation of Taiwan in Greece, Mr. Kuo expressed his admiration for the natural beauties of Chalkida and stressed out the existing potential for tourism development. Mr Kuo also affirmed the Taiwanese interest to import quality agricultural products from Greece.

The meeting was attended by Evia’s MP, Mr. Simos Kedikoglou. 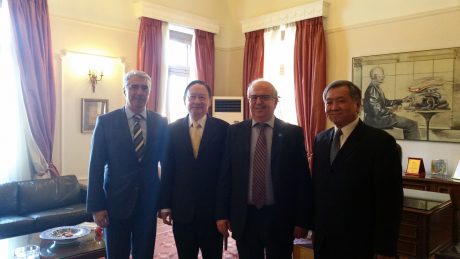