A special concert with the participation of the Hellenic Navy’s Philarmonic Orchestra, took place on Tuesday evening July 26th. The concert was organized by the Municipality of Chalkida and the Municipal Organization for Athletics, Culture and Environment (MOACE) as part of the celebrations for the patron saint of the City of Chalkida “Agia Paraskevi”.

Performing in an astonishing manner songs of the great Greek composer Giorgos Mouzakis, the Navy Orchestra confirmed its reputation as a leading band in the music life of our country.

The direction of the Orchestra had the Commander of the Navy Giorgos Tsilibaris and songs were performed by Evdokia Moisidou, Stavros Salampasopoulos, Andreas Karaouli and Sotiris Grammatikos. In his short statement the Mayor praised the morals, kindness and abilities of the Navy Chief of Staff and thanked him for his response to the invitation of the Municipality of Chalkida. Christos Pagonis went on to congratulate all the members of the Navy and of course the director Giorgos Tsilibaris, and the singers for their captivating performance.
Also, an award plaque was presented by Giorgos Yakoumakis to the Mayor of Chalkida.

In the end of the concert, which was attended by hundreds of music lovers, the Mayor of Chalkida Christos Pagonis presented an award plaque to the Navy Chief of Staff Vice Admiral Giorgos Yakoumakis. 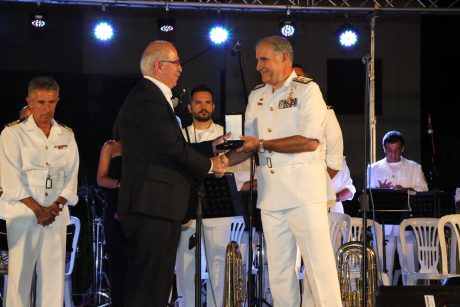